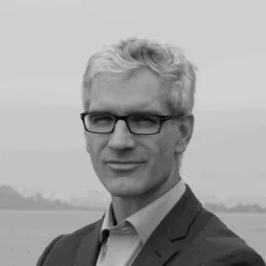 Kevin Banister is Simply Blue Group’s Chief Development Officer and President of Simply Blue USA. For almost 10 years, he worked for Principle Power, serving as Vice President, Head of Development. In this position, he led the company’s business and project development activities around the world, which included work with utilities, developers, government officials, stakeholders and policymakers, ultimately leading to a multi-GW pipeline of offshore wind projects, including three U.S. floating wind projects.

Based on the U.S. West Coast, he has 20 years in renewable energy with experience in policy, project development, and contract negotiation and planning. He has been a governor appointee to develop state and federal level renewable energy policy mechanisms and has developed projects ranging from electric vehicle charging, solar power, wave energy and offshore wind. He is the Board Chair for the Pacific Ocean Energy Trust (POET), a Board Director for the World Ocean Council, and is a founding member of Offshore Wind California. Kevin is a graduate of the University of California at Santa Barbara and holds an MSc in Economic Development from the London School of Economics.